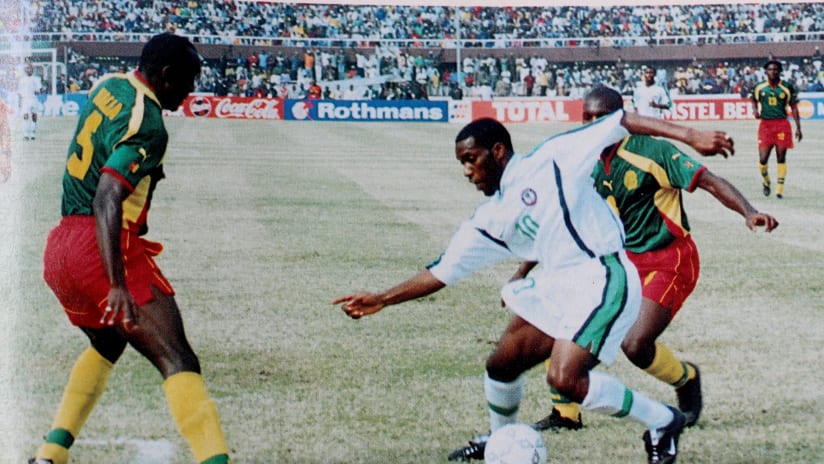 Ola Aina, Victor Osimhen, Simi Ajayi , Zaidu Sanusi, Tyronne Ebuehi will miss out due to injuries, but this will not in any way affect the monstrosity in the clash between the Super Eagles of Nigeria and the Indomitable Lions of Cameroon.

This battle between two African giants will take place in Vienna, Austria on the 4th and 8th of June 2021.

When you talk about epic clashes between nations that have emotional ties which cut through physical boundaries, this fixture is the one.

Though both teams will face-off in a friendly, the battle for pride changes the narrative.

Nigeria has a better win record, but the Super Eagles have suffered some agonizing defeat to their “noisy neighbors” Cameroon. 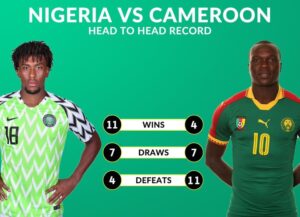 The first official meeting for these sides was an international friendly, with the game ending in a barren draw.

Nigeria then tasted identical 3-1 victories in the next two meetings.

One being a tie at the Nkrumah Cup in 1961 and an international friendly in 1962.

This must have been the start to a great rivalry between the two West African Nations.

After emerging second, from a group featuring Ghana, Malawi and Algeria at the 1984 AFCON in Cote D’Ivoire.

The Green Eagles defeated Egypt in the semi-finals on penalty, but could not withstand the Tyson hit from the indomitable lions of Cameroon.

The lions ran away with a 3-1 victory and the trophy.

The next time these two sides faced in an AFCON final was four years after 84.

An Emmanuel Kunde spot kick ensured they lifted the trophy and maintain bragging rights for another year.

Some Nigerians still find it difficult to forgive the “the prince of Monaco” Victor Ikpeba, for his penalty miss against Cameroon in the 2000 AFCON final.

The fact that the squad had the talents of Kanu, Okocha, Finidi, Sunday Oliseh, made the pain hit the marrow.

The generation redeemed their honour against the Lions in Tunisia, 2004.

Rohr is going into this friendly with a good record against Cameroon, defeating the Lions in three games out of three.

This fixture appears to be a friendly played abroad, but it is a battle for ages contested at home.

Even with a depleted squad Nigerians will be expecting a positive result against their Eastern neighbors.