Annette Echikunwoke, hit the qualifying mark for the Tokyo Olympics, after throwing 73.93m to place 2nd at the Arizona Elite Classic.

The 73.93m is her current personal best in the Hammer event.

She also becomes the 11th Nigerian athlete to punch her ticket to Tokyo2020.

Annette becomes the first Nigerian/African woman in history to surpass the 70m mark on multiple occasions. 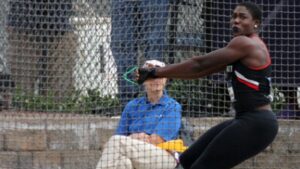 She’s been eligible to represent Nigeria since January 2021 After World Athletics confirmed her switch from the United States.

Annette Echikunwoke’s Personal Best of 72.25m is the African and Nigerian record.