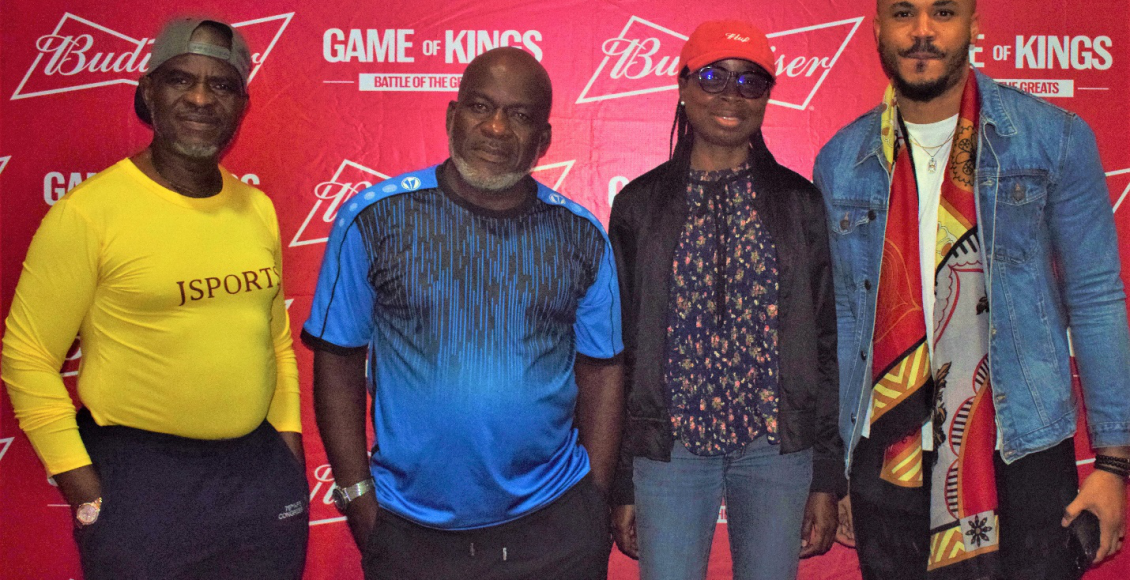 Two lucky fans have emerged managers of the two teams that will feature international football legends, John Terry and Roberto Carlos and football stars from the Nigerian Professional Football League in the Budweiser Game of Kings match scheduled to hold in Lagos this weekend. 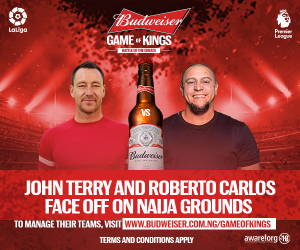 The keenly contested audition held at the Southern Sun Hotel in Ikoyi, Lagos saw Osinachi Egbuche and Seun John emerge team coach of Smooth FC and Kings FC respectively out of hundreds of hopefuls who were eventually pruned to 30.

Budweiser is a product of International Breweries Plc, a proud part of AB InBev, the world’s largest brewer with over 400 beer brands. The premium lager organised the audition that tested the manager-hopefuls’ tactical mastery and technical know-how of the beautiful game.

The judges, including veteran journalists, Mitchell Obi and Harry Iwuala, and co-anchor of the Kings of Football show and Budweiser Brand Ambassador, Ozoemena Chukwu, fondly called Ozo by fans, assessed the prospective team managers on other qualities such as communication skills, leadership potential, and man-management skills. 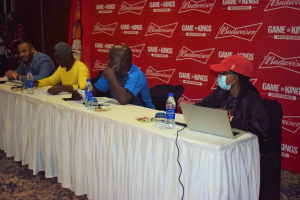 Sharing his thoughts on the audition, Mitchell Obi said “For me, it was revealing to observe the level of understanding of football by Nigerian fans, and I believe this is an opportunity to push the dimension and cultivate the culture of promoting our domestic football. This contest has opened a new phase for those who want to get involved in supporting the game.”

On her part, Marketing Manager, Budweiser, Olajumoke Okikiolu, said, “Budweiser Game of Kings team managers audition has been an interesting contest. We received numerous applications from consumers who desired to coach Smooth FC and Kings FC, and it was heartening to see many of those who made it to the final stage of the audition display a remarkable knowledge of football. It will also be interesting to see how the fan-led teams fare against each other in what will undoubtedly be a pulsating match on game day.”

Before being announced as one of the winners, a passionate Segun John refused to accept the notion of defeat when questioned on the possibility of his team losing. Segun, without mincing words, said, “I will not take defeat, I cannot take defeat, I must win. I will withdraw any player who thinks he is on the pitch to sell bread and butter. I will even bench John Terry or Roberto Carlos if they don’t meet my standard.”

Osinachi Egbuche who emerged coach of Smooth FC also expressed optimism about his team’s chances of lifting the trophy. “I am confident in my coaching abilities and can’t wait to show my tactical superiority come game day,” he said. 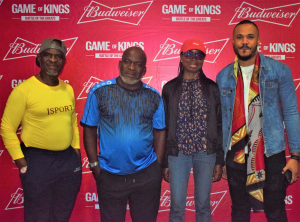 Meanwhile, the match will air on SuperSports, NTA Network, and STV to cater to fans who will not be at the stadium to see their football icons play.