Nigeria’s D’Tigress is ranked 16 places below world number one, the United States of America by FIBA, so it should not be a rivalry.

But this is not a David and Goliath story it’s more.

The basketball world is witnessing a new and unusual rivalry between Nigeria and the United States.

This developing rivalry between the USA and Nigeria usually delivers premium excitement and grit.

From Large Margin Victories to A Close Contest

The last meeting before the Tokyo Olympics ended in a slim 76-71 points in favour of the world number one despite Nigeria leading for the better part of the game.

Many described it as a more improved showing against the team they had earlier lost to 71-40 at the quarter-finals of the 2018 World Cup.

They also reduced a 20-point deficit to just Nine points before they ran out of time.

D’Tigress displayed cohesion in Q3 and Q4, but it was too late, as their undoing was in Q2 when they fell short at the rim.

The Nigerian girls showed glimpses of quality and the potential to improve in subsequent games.

They forced Team USA to 25 turnovers before losing 81-72 to Team USA at the Tokyo Olympics.

D’Tigress And The American Connect.

A large number of the Nigerian team grew up and learned basketball in the United States.

So, going up against the country of their birth means more, especially if they are a world power.

It’s not just about the players as the head coach Otis Hughley and the assistant coach are from the U.S. too.

Nigeria’s assistant, Ruthie Bolton, was a former U.S. basketballer and two-time Olympic winner in 1996 and 2000.

Her former Olympic teammate Dawn Staley is coaching the Americans. She is the first Black female head coach, the U.S. women have ever had.

The rivalry got to its head when former WNBA number one pick, Nneka Ogwumike, requested to join up with a younger sister, Erica in the Nigerian team After being left off the U.S. squad (team officials cited a knee injury).

The request to switch nationality by Nneka Ogwumike was rejected by FIBA.

A member of the U.S. team took a swipe at her when asked about the situation after the win.

“It’s years of work to get here, I think that’s the one thing that’s the most satisfying. You don’t just show up on this team and, you get to play. You’ve got to earn your stripes. It means a lot to be here.” – U.S. star Diana Taurasi

“They like to make the game chaotic they like to make you do things that you are not used to doing, play a way you don’t want to play. It’s never going to be pretty against them,” she said. – Sue Bird – USA Basketball

A deeper look tells you that is how you describe an opponent that would not allow a walk-over.

Meanwhile, Nigeria’s coach, Otis Hughley, describes meeting the USA too early although, they were up to playing basketball. 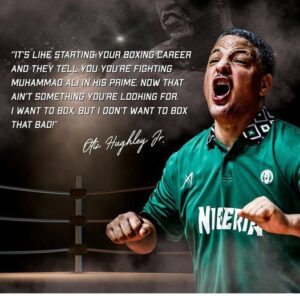