Another NCAA season, another sprint star for Nigeria as the men’s sprint section comes alive with Favour Ashe. 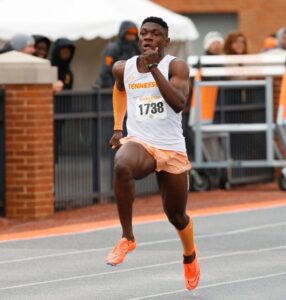 Since the exit of Olusoji Fasuba, Nigeria has struggled to produce top and consistent male sprinters.

In the last five years, the country is gradually filling that void with sprinters like Enoch Adegoke, Divine Oduduru and African Games champion Raymond Ekevwo.

Also coming on the periphery is Alaba Akintola, who won silver at the Youth Olympics in Buenos Aires.

The latest star along the production line is Favour Ashe. 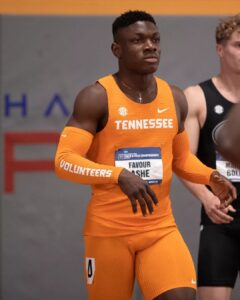 From Humble beginnings with The Making of Champions athletics club in Nigeria, Favour is fine-tuning himself in the NCAA with the University of Tennessee.

Making a good impression at the 2018 MoC Athletics Trials in Ughelli, Favour was one of the athletes selected to join the MoC Track Club for the 2019 season.

Nicknamed ‘Ashe Bolt’ by his teammates, Favour Ashe made history by becoming the first athlete from MoC Track Club to run a World Lead at any time, barely one year after joining the club! He shattered his PB after storming to an incredible World U20 Lead (at the time) of 10.40s to win his 100m heat at the AFN All-Comers in Akure in February.

Earlier in the season, The 19-year-old hit a Personal Best (PB) of 6.51s to win the first heat of the men’s 60m at the NCAA Indoor Championships in Alabama.

Favour’s time is the fastest by a Nigerian sprinter this season and further breaks his Freshman Record for Tennessee. Similarly, his time at the weekend places him on an exclusive list of Olympic medalists.

For context, a look at the top five fastest times in NCAA history:

The sprinters above him have either won Olympic or World Championship medals.