By Admin On Oct 16, 2020
19
Share
Former Ghanaian youth International, Gifty Acheampong has expressed her delight with joining the Nigeria women professional league defending champions, Rivers Angels.
Acheampong featured at the 2016 U-17 FIFA Women’s World Cup in Jordan where she scored 2 goals and had 1 assist in four matches for the black maidens.
The 20-year old told Rivers Angels Media that signing for the Port Harcourt outfit would give her more international exposure.
“I’ve been hearing so much about this team and have seen how consistent they’ve been every season.
“Their winning mentality is one of the reason I decided to join them because I equally love winning.
“I’ve equally seen most of their players get bigger deals in the European scene which is the prayer of most players plying in the domestic league and I’m certain my stay here will give me more opportunities.
“I also intend to win a title or even more while I’m here with them”, said Acheampong.
Also Rivers Angels Football Club of Port Harcourt completed the signings of two other Ghanaian players ahead of the upcoming Nigeria Women Football League (NWFL) Premiership season.
Patricia Mantey (Ghana Immigration Services), Mary Essiful (Soccer Intellectuals Fc) all agreed one-year deals with the NWFL defending Champions.
The trio are a goalkeeper, midfielder and centre forward respectively are expected in Port Harcourt, Southern Nigeria by next week. 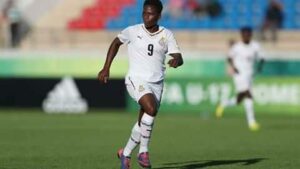 The other two players; Mantey, 28, and Essiful, 27, are senior national team players with the Black Queens of Ghana and were in the team that hosted the Women’s Africa Cup of Nations in 2018.
Gifty AcheampongMary EssifulNigeria Women Football LeagueNWFLPatricia ManteyRivers Angels
19
Share FacebookTwitterGoogle+ReddItWhatsAppPinterestEmail

Handball Premier League Gets The Go Ahead To Hold In October