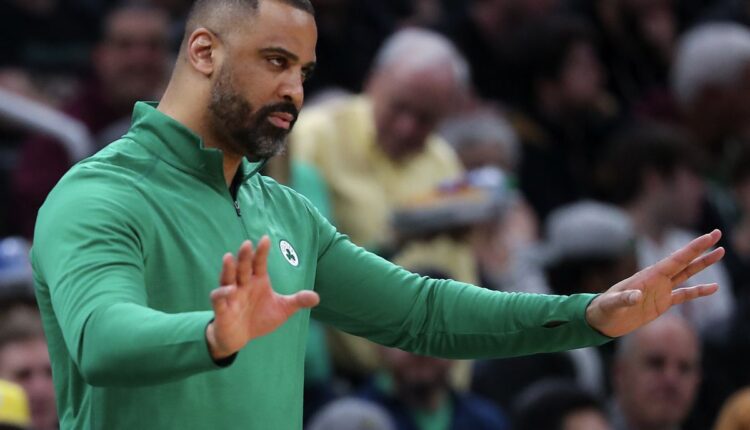 “They said, ‘You’re not a real Celtic until you win a championship, ” Ime Udoka said to Andscape. “All you hear is put ‘Banner 18’ up there. ‘Put up Banner 18.’ That’s the realistic expectation of the city, the fans, the organization, and myself and the players.”

The quote from Ime Udoka to Andscape latently tells a story of hard work and change.

It represents a change in career outlook for Boston Celtics coach Ime Udoka who had a slow start to his NBA career. 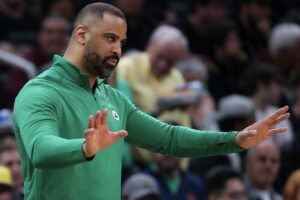 Ime Udoka playoff: A Turbulent Star To The Season

The 16-19 record at the beginning of the season raised some questions, but all are now in the past.

The answer includes winning 50 games in his rookie season and two Eastern conference coaches of the month.

The Celtics went from struggling at the beginning to winning 15 of their final 19 regular-season games.

The home stretch runs improved Boston Celtics to a 51-31 record. 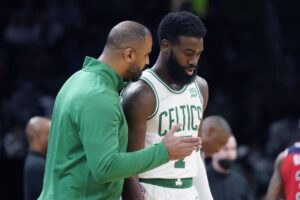 Also, The record means Udoka is the third rookie coach in Celtics history to reach 50 wins.

Before getting the Boston Celtics Job, Udoka’s learning curve included working with Popovich at Spurs, where he won the NBA title as an assistant.

Udoka winning the 18th title for Boston Celtics is a tough ask, especially after losing its starting centre Robert Williams. 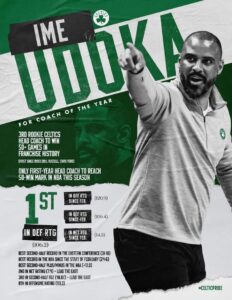 His team closing record of 15-19 shows they are the hottest team in the league going into the playoffs.

Boston won three out of four games with an average victory margin of 21.3 points In the season series.

Meanwhile, the Brooklyn Nets almost swept Celtics in the first round just a little over a year ago. The only difference now? 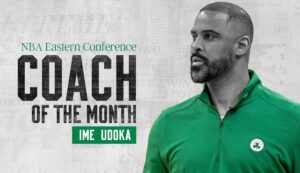 So many changes have happened since that meeting, and this is not the same Boston Celtics team, nor is this the same Brooklyn Nets team.

Ime Udoka’s team own the NBA’s top-ranked defensive rating by far, and that will be the base to launch forward for the Celtics.