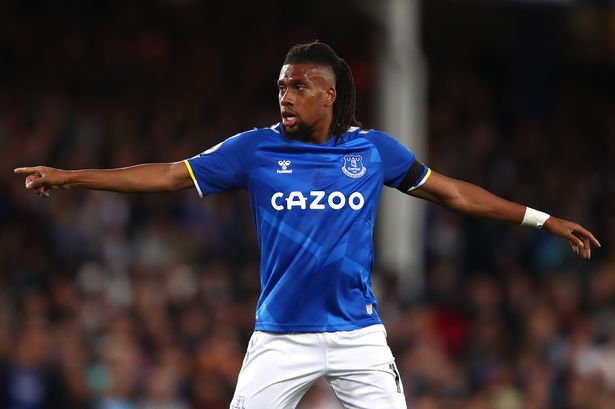 Bought at £28 million with so many questions hanging over the fee, Alex Iwobi is now providing answers on the field with world-class performances.

Iwobi is thriving in his new midfield role, covering an impressive 10.7km per 90 minutes, and galloping forward in rhythmic strides.

He delivers complete performances in the heart of Everton’s midfield every matchday, and ex-Nigerian international Sunday Oliseh thinks he is on another level.

But that was not always the story in his Everton career.

Halfway through last season, Iwobi was not good enough to inspire the club up the table and save them from relegation.

The Super Eagles star sum-up his stay so far at Everton, sharing a rear insight.

“It wasn’t an easy ride, to begin with, moving from London to up here.

I did have difficult spells, but the main thing for me is remaining consistent, which I’m doing now.

Something I’ve learnt is that as long as you give 100 per cent here, the fans will always have your back.
I just need to make sure that continues. The fans recently have been great to me.

At 26, for most of his career Iwobi has been turned between becoming a diligent midfielder rather than a floundering tricky wide forward.

The internal crisis got to a head during the reign of Carlo Ancelloti when the coach only got to know from an interview about his preferred role.

His first few stints in the midfield role conjured ridicule from fans, but he never gave up.

Current conventional wisdom at Goodison Park is that he is one of their more important players.

What Alex Iwobi And His Stats Shows

According to Squakwa, the once polarising winger has changed the Merseyside narrative to become Lampard’s trusty No. 8.

Incredibly he ranks sixth among Premier League midfielders for regains of possession.

Eight chances in his first three games for someone playing as a CM means he’s created the most non-setpiece chances amongst players outside the top six.

And he’s playing a fair more withdrawn role. Give him finishers, and he’ll destroy the assist stats.

If Everton had finishers, he’d possibly have a minimum of 4 assists despite playing as a six and not as an attacking midfielder.

Love And Growth From Lampard

His relationship with Lampard has been one of the major highlights of the turn-around.

Lampard believes it’s a dream to work with Iwobi and believes he has a high intelligence to play the position.

“When I came back from AFCON, he’s always given me the belief to go on and express myself; to play the way I train. I have been repaying the faith that he is showing.

There has been little to cheer at Everton as the club is still winless after five league games. Still, the rise and renaissance of Iwobi as a repurposed No. 8 might be the key to taking Lampard’s Everton career out of the still relegation waters.