The new coach bounce is an unwritten law in football as clubs get a turnaround in fortune when they appoint a new coach.

This unwritten law is currently working for three teams in the Nigeria Professional league.

The Exit Of The Oracle And The New Beginning

After Gbenga Ogunbote dropped his resignation letter for Sunshine stars, everyone fear the worst will happen.

The arrival of an untested NPFL coach further sent shivers down the spine of the fans of the Owena Whales.

Three games after, the sun is finally shining on Deji Ayeni and Sunshine stars with two wins in three games.

Before Deji Ayeni, Sunshine went winless in 17 games and their top scorer couldn’t score in 6 games.

Also, Sunshine Stars were languishing in the relegation zone and haven’t won a game since January.

They last won a match against Rangers on the 31st of January before the new coach bounce.

Unexpected Revival From the Fire Boys

No one gave Lekan Gabriel a chance when he was appointed as MFM FC interim coach.

Languishing on the edge of relegation, Gabriel took them to 10th place as at match-day 28.

After he took over, the club went unbeaten in the month of May picking up valuable 10 points.

Since his Interim Appointment in February 22, Gabriel has won 7 games, drawn 5 and 5 Losses.

The Messiah From Sudan

After some string of poor results Katsina united turned to Sudan based, Azeez Mohammed for their new coach bounce. 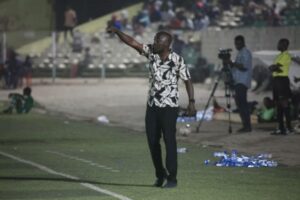 Before Azeez took over from May 3rd, Katsina United were 18th on the log with just five wins from 19 attempt.

Under Azeez, they’ve won 4 of their 5 home games. The one draw was against Pillars.

The home form is so fierce that they have scored 12 goals in five games, conceding only four.