Nigerian-born basketball star, Ochai Agbaji won the biggest title in US college basketball and, with it, a finals MVP.

Agbaji played a crucial role in the Kansas Jayhawks’ 72-69 come-from-behind win over North Carolina in the final.

The guard featured for 37 minutes, contributing 12 points and three rebounds to his teams’ victory. Thanks to a second-half flurry Agbaji led Kansas to erase a 16-point deficit and complete the biggest comeback in title game history,

After the victory, Agbaji was named the 2022 NCAA Men’s Tournament’s Most Outstanding Player.

Previously, he won the Associated Press and coaches’ Big 12 Player of the Year, Big 12 tournament MVP, and made the first-team All-American. 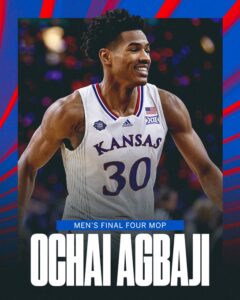 The youngster also caught the attention of NBA star, Damian Lillard amidst news of an NBA Draft opportunity. 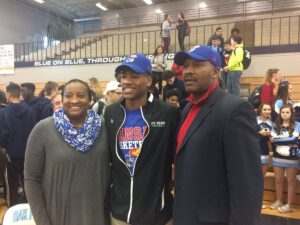 Ochai Agbaji is the son of two University of Wisconsin-Milwaukee basketball players, Erica and Olofu Agbaji.