Osimhen On Track To Overtake Yekini With Games To Spare.

Over the years the Nigerian team had churned and is still churning out the quality in the attacking department, with Victor Osimhen scoring four, equaling records set by Elikana Onyeali and Rashidi Yekini, for the same amount of goals scored in a single match.

The Super Eagles of Nigeria on the 13th of June, 2022 brought excitement to fans with a thumping victory against Sao Tome and Principe.

10 -0 was how the game ended with Victor Osimhen scoring four, a super hat-trick.

Meanwhile, if Osimhen keeps scoring at his current rate of 0.68 goals per game, he is on track to surpass Rashidi Yekini’s record by his 58th cap.

Four fewer than it took the Goalsfather to set his 37-goal mark. 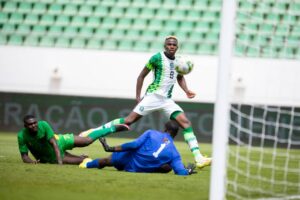 Osimhen is not the first striker to attempt this Everest.

Samson Siasia another striker finished his time with the National team with an average of 0.3 goals per game.

Many Nigerians will never forget Yakubu Aiyegbeni. Aiyegbeni, the striker who chewed the Eagles’ chances of making it into the round of 16 against South Korea, at the 2010 World Cup in South Africa. Although that day was unfortunate for the Nigerian, his goal-scoring ability is astonishing.

Yakubu Aiyegbeni recorded 21 goals in 58 games for the national team, averaging 0.3 goals per game. Ikechukwu Uche who played alongside Yakubu recorded an average of 0.41 goals per game for the Eagles.

Obafemi Martins who started his time with the Super Eagles in 2004, finished in 2013 averaging 0.42 goals per game, he played 42 games. However, the top goal scorer at the 2019 AFCON, Odion Ighalo, is the closest representation of a goal poacher to the 21st-century Nigerian. The former Manchester United forward who is still active has 16 goals in 37 games averaging a 0.43 goal ratio.

The Best Of The Oldies

Segun Odegbami was christened mathematical in his active days for the Eagles recorded a 0.46 goal ratio. The mathematical genius who never played outside the shores of the country served the nation in 47 games. This precision in front of the goal by the mathematical genius is seen to be bettered by a policeman who was a sharper shooter. Discovered playing for Police Fc in Lagos, Sunday Oyarekhua was a menace in front of goal.

Oyarekhua scoring 17 goals in 28 games for the national team, at a 0.6-goal ratio makes him PROLIFIC!!!!

When it comes to goal-scoring playing for Nigeria, one name heralds above the others, the gangling 9, Rashidi Yekini.

Averaging 0.5 goals for the Super Eagles, the Kaduna-born forward was a terror in the sight of opposing goalkeepers. 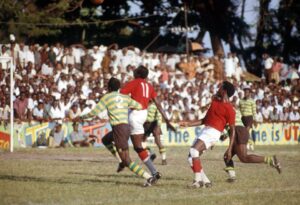 As the country celebrates the gangling 9, for his goal-scoring heroics, history will never forget the marksman Elikana Onyeali. Onyeali played 11 games for the national team and recorded 11 goals between 1959 to 1961. Yekini was scary, but Elikana must have been terrifying.