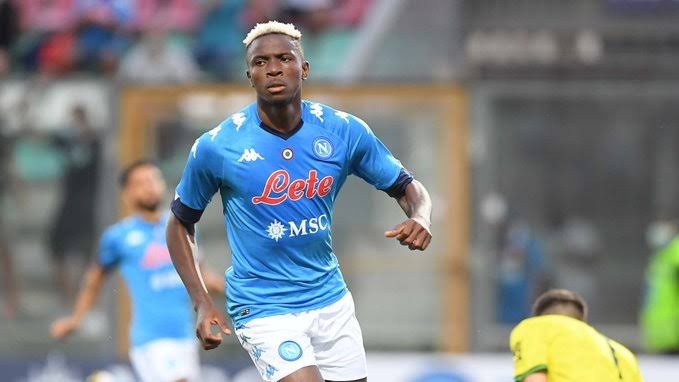 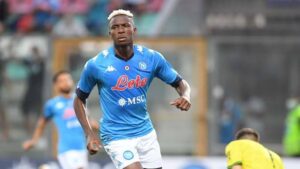 According to Italian news outlet Tuttosport, Napoli medics allege that Nigerian team doctors did further damage to Victor Osimhen’s shoulder while trying to set it back into place.

The Napoli striker dislocated his shoulder during Nigeria’s 4-4 draw with Sierre Leone in an Africa Cup of Nations qualifier on November 13.

Super Eagles medical staff tried to set the joint right on the field, before Osimhen was then removed from the match. The 21-year-old then returned to Italy for tests and a specialist consultation.

Tuttosport claim that the shoulder dislocation has fully recovered, but Osimhen still can’t lift his arm properly and remains unavailable for the Neapolitans.

This is allegedly because the incorrect technique used by the Nigerian doctors inflamed a tendon in his shoulder.

“The shoulder is now in place, the problem concerns the arm that has a reduced sensitivity and cannot lift,” Tuttosport reports, as per IamNaples.It.

“Apparently, in the manoeuvre to reduce the dislocation, the staff of the Nigerian national team made a tendon inflame. Maybe he could make it for the match against Sampdoria, with little optimism from the club.” 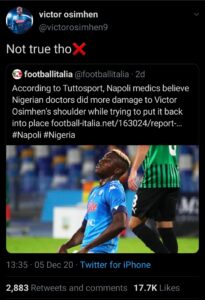 The player in question, Victor Osimhen has now come out to rubbish the allegations against Nigerian national team doctors by dispelling the reports via his twitter account.