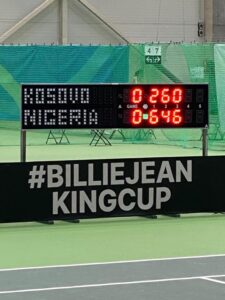 ​She became the second person ever to achieve this feat after Osabuohien won Nigeria’s first in Lithuania. 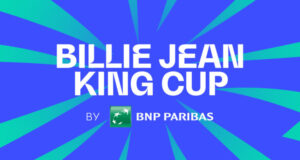 Osabuohien and Quadre only needed 54 minutes to win against Bashota and Lekaj to make it a clean sweep.

Despite their win Nigeria missed out from the promotion play-off while they will now be aiming to finish well to avoid relegation to Group IV. 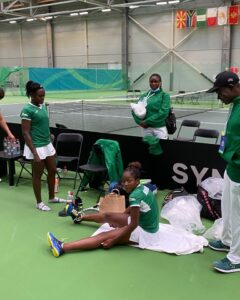 Nigeria is participating for the time in the history of the tournament either as Billie-Jean King Cup or Fed Cup.

Representing team Nigeria are the trio of Oyinlomo Quadre, Sarah Adegoke and Adesuwa Osabuohien while coach Rotimi Akinloye, is the team captain.

Formerly known as Federation Cup at it’s launch in 1963.

The International Tennis Federation (ITF) launched the competition to celebrate the 50th anniversary.

The competition changed name to the Fed Cup (1995-2020) before another major rebranding effort.

It is now the world’s largest annual international team competition in women’s sport, with 116 nations registering in 2020.

It was rebranded in 2020 to align with a global icon who dedicated her life to fighting injustice, inequality and discrimination in all forms.