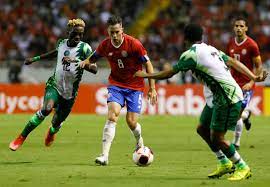 Nigeria featuring a mix of unknown players and NPFL stars lost 2-0 to World Cup-bound Costa Rica in a friendly international on Wednesday.

Oscar Duarte’s seventh-minute goal was followed by a second from Kendall Waston in the 73rd minute against a Nigerian team without any of their overseas-based regulars and made up mainly of members of their Under-23 team.

A shaky defence littered with poor coordination and timing issues. The central defensive pairing of Isaiah and Daniel Struggled to get going.

The team didn’t record a shot on goal on the night and rarely troubled the Costa Rican Goalkeeper.

Here are the Sportsintel ratings of the Coach Salisu-led side.

Bankole Kayode – Captain on the night, Bankole conceded two goals from set pieces after being let down by his backline and made a good save off Joel Campbell.

The Remo Stars goalkeeper didn’t do much afterwards but assured with his ball-playing ability and area dominance.

Evans Ogbonda: Evans failed to track Oscar Duarte’s run on the first goal as he was caught ball-watching. He kept the ball moving at basics.

Dominion Ohaka: By far the brightest and most exciting player on the pitch, Dominion Ohaka was solid at the back, and impressive going forward with good crosses.

Costa Rica changed players in the second half, a move which provided a tougher challenge for Dominion, but he manage to scale through.

Isiah Ejeh: Isiah didn’t cover himself in glory for the goals Nigeria conceded on the night. Ejeh was late with tackles and almost risked a red card.

Bamaiyi Daniel: Daniel was part of the defence that failed to track runners on set pieces, and was average with his use of the ball.

Paul Samson: On a night in which the super eagles didn’t create enough in the attack, the Kwara United attacker forced a save off the Costa Rica goalkeeper.

Chidiebere Nwobodo: Had little impact in the game.

Qudus Akanni: The team didn’t create any shots on target, but Qudus went about his high press well, but also didn’t do enough to open up the Costa Rica backline.

Afeez Nosiru: The Kwara United midfielder protected his defence well, and he didn’t put a foot wrong. Afeez was full of energy and tireless running too.

Daniel Wotlai: Daniel was quite decent on the night, still not as lively as you’d expect.

Edidiong Ezekiel: had a bright start to the game but was always shooting at every chance on goal, thought he could have played more with the team but always a threat on the ball.