“My dream is not just to qualify for the Olympics, I want to win medals at the Games, and I know I can achieve that through dedication, hard work and consistency ” Mati Taiwo.

Mati Taiwo, Nigeria’s teenage table tennis sensation, confidently reveals his plans to write his name in the history books in a conversation earlier this week. 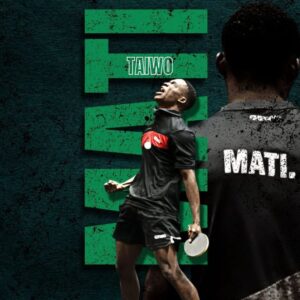 Last December, the 17-year-old won a bronze medal at the World Youth Championship in Portugal. The feat makes him the first Nigerian to win a medal on the global stage at the youth and senior levels.

Having reached this height, the youngster feels pumped to replicate the feat in the senior men’s category. Taiwo believes with a high level of discipline, hard work and consistency, he would become the first African to win a medal at the Olympics.

“If I continue this way, I may become the first African to win an Olympic medal in table tennis and at the World Championship.”

After venturing into the ping pong game in 2012, Taiwo’s career progression has been on the rise, having won the African Youth Championship in Ghana in 2019.

A Tale of Many Victories

Mati also emerged as the champion of the national U21. And this has made him play along with some of the country’s finest, including seven-time Olympian Segun Toriola and Aruna Quadri.

“I won the African Youth Championship in Ghana in 2019. I have also won the national U21 and the men’s national championship.

“Last December, I won the World Youth Championship bronze medal in Portugal (2021) – and that is my biggest achievement so far. It also makes me the first Nigerian to win a medal in the youth and senior categories at the tournament.

“My journey has been impressive so far. I’ve really played my way through within a short period (10 years) – representing Nigeria at tournaments both in the youth and senior men’s categories.

“No one will believe my career progression because of my age and having had the opportunity to represent Nigeria with the likes of Segun Toriola and Aruna Quadri. These are people who were playing table tennis before I was born, so, I count it as a privilege to be in the same team with them. All I can say is my journey has been so good and impressive.” Despite all his successes, the TTC Bietigheim-Bissingen player is not without his peculiar challenges.

The 17-year-old made the list of 13 beneficiaries of the 2021 International Table Tennis Federation scholarship, but a lack of sponsors may hinder him from realising his dreams.

He said: “The challenge I am facing now is lack of sponsors. “I really need one urgently to be able to fulfil my dream. Mati continues -I got a scholarship from the international table tennis federation, but I don’t have a sponsor to back it up while other players from other countries have already started.

“I do miss tournaments sometimes. I have about four tournaments I should attend now but without a sponsor, I can’t do that. The federal ministry is doing well, but they cannot do everything.” 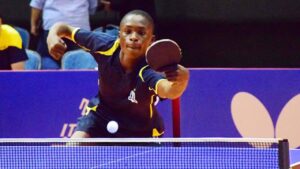 How Mati Taiwo Fell In Love With Table Tennis

Although table tennis was not his first love, Mati Taiwo reveals how his older brother’s former coach (Olakunle Fadojn) discovered him by just playing one game during one of their training sessions.

He revealed. “I got into table tennis in 2012. My brother was the first person, who started playing table tennis in my family, so I normally follow him to the stadium to watch football instead.

“Right from childhood, I liked playing football, and whenever I heard 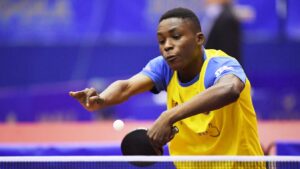 him going to the stadium, I always went there to watch football, not table tennis.

“But one day, I decided to go to the table tennis court just to watch them. The coach saw me and asked, is this your brother? Can you just play?

“I am a left-hander, and when he saw that, he said it would be better if I played table tennis because left-handers are very good and always difficult to play against.

“so, I agree with him, and he started training me by himself, and that was how I started going to the court with my brother every single day before my journey as a professional started. 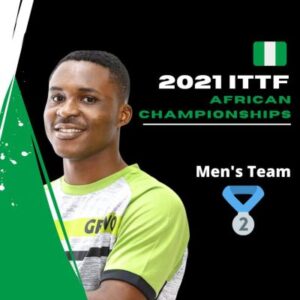 Apart from winning the World Youth Championships bronze in Portugal last year, Taiwo Mati has equally won silverware at other tournaments, including a silver medal at the ITTF Africa senior men’s championship in Yaounde.

He also won gold at the national U21 championship the same year among other laurels.