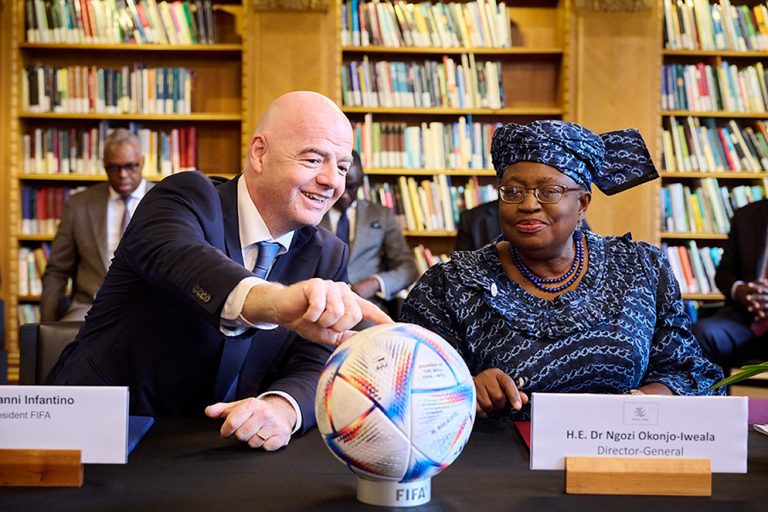 Yet another FIFA World Cup is upon us, and the world cannot wait to experience another football spectacle. The various national teams that have qualified for the Mundial have released their official gear for the month-long tournament set to hold in the Middle East(Qatar) for the first time in the history of the FIFA World Cup. As expected, fans are queuing up at sports stores (physically and online) to buy theirs and proudly wear the colours of their national teams.

This means that the manufacturers of these gears will smile to the bank and benefit from the enormous wealth entrenched in the football business. However, unfortunately, the wealth is concentrated in just a few regions of the world, like Europe and South America, with Africa benefiting just a fraction from this.

All that is set to change as the World Trade Organization and FIFA have reiterated both organisations’ commitment to making Africa a significant hub for football merchandise.

According to FIFA President Gianni Infantino and WTO Director-General Ngozi Okonjo-Iweala, “Football is a vital instrument for progressive economic development, inclusion and equity. It is thus fitting that the WTO and FIFA are now joining hands to try to spread the benefits of growth in men’s and women’s football beyond the pitch, the boardrooms and FIFA’s 211 member associations.”

“A key mechanism for doing this will be to diversify the global networks of suppliers that feed into FIFA merchandising. The aim is to encourage more football-related merchandise to be sourced from the world’s poorest countries and from the millions of small enterprises that make up the backbone of the global economy. For example, the WTO and FIFA will seek to boost the sourcing of cotton used in FIFA’s sportswear and other merchandising from least-developed countries such as Benin, Burkina Faso, Chad and Mali, where cotton is a particularly important source of livelihoods and export revenue. Connecting vulnerable producers in these countries to important football value chains would create jobs, boost growth, and improve people’s lives.”

In addition, ‘The two organisations will engage in the joint analysis of football-related value chains to find additional opportunities to promote inclusive outcomes.”

Both organisations are also keen to ‘develop activities that leverage Football’s influence to support economic empowerment, particularly of women’

Ngozi-Okonjo Iweala and Gianni Infantino revealed this in a joint opinion editorial published by Allafrica.com.