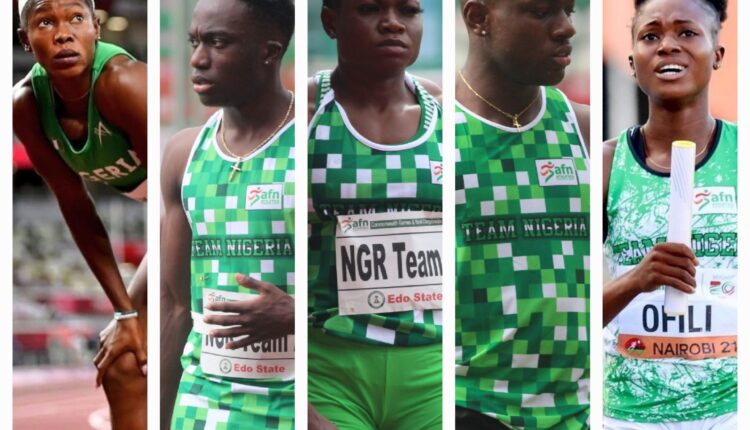 Student-Athletes: The NCAA and The future of Nigeria Athletics

In January 2022, the US National Collegiate Athletic Association (NCAA) accepted the highest influx of Nigerian student-athletes, with over 50 of them signed with different colleges on scholarships.

Most of these athletes made immediate impacts at the NCAA Eastern and Western Conferences prelims, where an astonishing 17 out of 26 competing Nigerian athletes qualified for the NCAA Outdoor Championships, the third-highest qualifying nation behind USA and Jamaica.

And then competing at the Nationals, they produced historical performances. In the women’s 100m, the trio of Grace Nwokocha (North Carolina A&T), Rosemary Chukwuma (Texas Tech University), and Favour Ofili (Louisiana State University) ran brilliant times of 10.97s, 10.99s, and 11.08s respectively in their semis to make the final.

Their feat became the first time in history three homegrown Nigerian athletes competed in the event’s final and had multiple sub-11s runners in a season, with Ofili having ran 10.93s earlier in the year and later won the 200m Silver medal with a massive 22.05s.

Others as Nnamdi Chineherem and Ezekiel Nathaniel of Baylor University, finished 4th in the Javelin Throw and 400mH, as well as Best Erhire (High Jump) and Esther Isa (Triple Jump) getting to the final, thereby earning First Team All-American Honours; while the remaining members of the team that bowed out in the semis earned Second Team All-American Honours.

World Junior Record Breakers Setting The Tone For The Future

Noteworthy is that majority of these 2022 signed college athletes got scouted at the 2021 World U20 Championships in Nairobi, where Nigeria finished third on the overall medals table with 4 Gold and 3 Bronze medals – the highest podium finish for the country at any global athletics championship.

The migration of Nigeria’s brightest athletics talents to American colleges on full scholarships and how it has tipped this year can be due to several reasons; majorly due to the guarantee of having free education and an opportunity for the elevation of their talents to the next level.

This gives the edge of them donning the country’s colours internationally, thereby winning medals at continental and global championships – directly resulting in giving their families a better life.

But with these advantages come the disadvantages, from our administrators failing to effectively manage and maximize the potential of our raw talents into world dominance without needing the NCAA system.

With Paris Olympics on the horizon, one asks, is there any sustainable developmental program to ensure these athletes transfer their NCAA successes to winning medals in 2024?

Nigeria athletics witnessed the first tipping point generation in the ’80s when athletes such as Fatimat Yusuf-Olukoju, Innocent Egbunike, Mary Onyali, and Ezinwa brothers gained US college scholarships. They not only went on to dominate the NCAA but became World and Olympic medallists, with our best Olympic outing being at Barcelona 92.

In this, they were merely perpetuating a Nigerian tradition of excellence in sprinting. In fact, they succeeded so much in their era that the World Athletics governing body listed Nigeria amongst the top three best track and field nations in the world.

They exhibited the true secret of Nigeria’s track and field success and tradition – producing not just one superstar, but one after the other. However, the very first role models were developed in the ’70s, nurtured first by Nigerian sports officials eager to encourage international success, and then by American universities eager to offer scholarships in return for national titles.

These pacesetters laid the proper foundation until there was a decline in the millennium – which many pundits arguably points to the low acceptance of our athletes in the NCAA. The nosedive boiled down to the administrators not having a sustainable and improved program that worked in that era, of keeping up with the tradition of discovering and training more talents from grassroots to international brilliance. These problems became overwhelming when the colleges refused to grant more scholarships.

A Hope Named Blessing Okagbare And Others

Nevertheless, a beacon of hope arose in Blessing Okagbare when she signed with University of Texas El Paso (2008), followed swiftly by Tobi Amusan (2016), Divine Oduduru in Texas Tech (2018), and Raymond Ekevwo in University of Florida (2019), after which their college, professional and international excellence is one for the record books.

With the success of the current set in the NCAA, which will presumably continue years from now, considering most of these are in their first year and more youngsters are to migrate as well, it’s only reasonable to foresee having medallists at Paris 2024, just like in Barcelona 92.

Malcolm Gladwell wrote in his bestselling book: Tipping Point “Tipping Points are a reaffirmation of the potential for change and the power of intelligent action.”

To achieve this, our administrators needs to shift their focus away from the short-term success but on the long-term goal of developing our educational programs to make it easier to combine sports and education.

For instance, the University of Port-Harcourt high performance centre has been a hub of nurturing new talents, with success stories as Nwokocha, Ofili, and Joseph Edafiadhe (all presently enrolled in the NCAA). The centre needs an upgrade with modern-day training equipment and empowerment of coaches with refresher courses to keep up to date with what’s happening around the world.

Secondly, ensuring the continued excellence of these athletes post-college by providing the needed financial assistance, welfare packages, upgrading stadium facilities and coaching knowledge to world standard, and having the right environment to sustain and manage them to elite level. This right environment most importantly should evolve round their mental health by not putting too much pressure on them winning medals, but after their longevity.

Though medalling at major championships is important, but having a balanced overall system which helps their strength a lot, results in them having a longer career of productivity, and excellence in their performances.

Thirdly, each state needs to start treating grassroot development seriously. Although there’s been a significant improvement in the past few years with states such as Delta, Akwa-Ibom, Ogun, Ekiti and Rivers currently producing the best homegrown athletes in the country, more states needs to imbibe the culture, so the growth of the sport can be visible in all ramifications and translate to the professional level.

Finally, the Nigerian University Games (NUGA) need to become an elite championship, where the standard is high enough to discover new athletes worthy of international dominance at senior level. So it won’t just be a situation of local champions being made, but athlete discovered can rub shoulders with the NCAA athletes and the elites internationally.

The NCAA is arguably one of the most competitive athletics systems in the world, in comparison to any global championship. Which means if an athlete dominates and wins several titles as a collegiate athlete, the percentage of doing this at a World Championship or the Olympics is very high.

Athletes such as Ese Brume, Tobi Amusan, Chukwuebuka Enekwechi, Raymond Ekevwo, and Enoch Adegoke, have been consistent in the past few years putting Nigeria Athletics image positively on the global athletics map, one which has spurred the collegiate and homegrown talents to achieve more and believe in the future.

The potential for change and power for intelligent action is now, where these athletes still U-25 can trust in the assurance of an international career and swift transition to professional level, with the backing of the Athletics Federation of Nigeria (AFN). 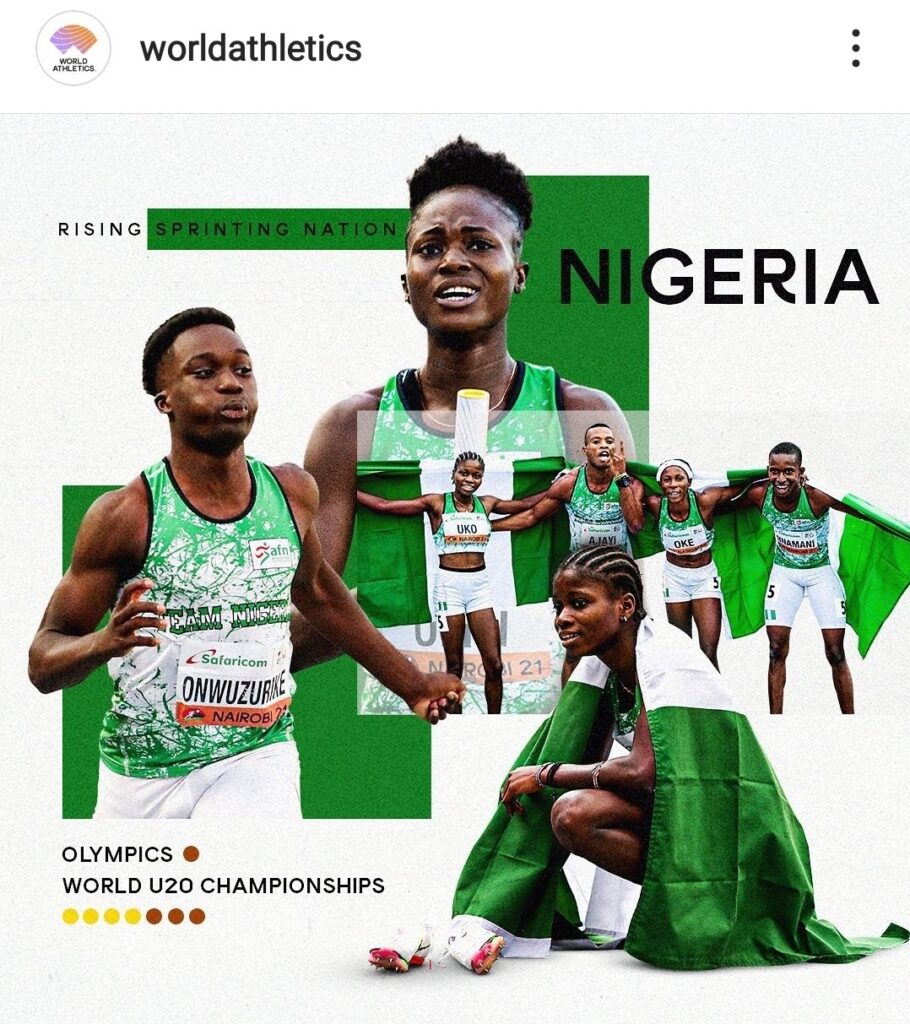 The momentous point is the upcoming World Championships in Eugene, and Commonwealth Games in Birmingham, UK, where Nigerians are looking forward to having multiple medallists and giant strides taken to lay a strong foundation ahead of Paris 2024 and beyond.

We’re witnessing the second tipping point in Nigeria athletics, a wave that needs to be built upon, so Nigeria can upgrade from being a ‘Rising Sprinting Nation’ referred to us by World Athletics after the World U20 Championships, and be known as the ‘Best Sprinting Nation’ in the world.

Why not? We’ve got the wealth of talents to compete with the best countries in the world.